UMP TO RESTORE TERENANG CERAMIC, THE HERITAGE OF PAHANG 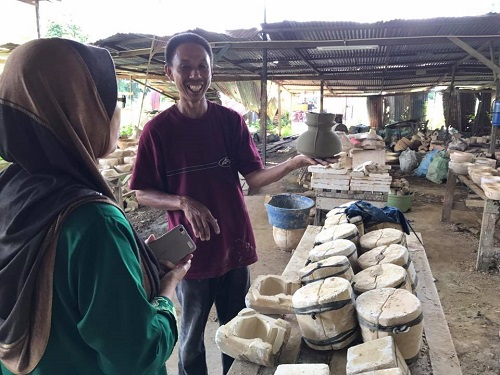 Not many of us know the existence of Terenang Ceramic, a pottery used to store water in the olden days. It is believed to have its origin from Pasir Durian Village in Kuala Tembeling, located an hour drive to Jerantut, Pahang. Terenang was traditionally made using a very time consuming method, which is “pinch and squeeze” method. Introduction to the modern method by Kraftangan Malaysia brings huge different to the producing of Terenang. Mould/cast technique that has been applied help to mass produce Terenang and this really help in saving time and cost of producing it. The used of Plaster of Paris mould enable Terenang to be produced in different sizes according to its functions and customer’s need.

Terenang is basically designed with no base and lid. But this two feature was later added by the craftsmen from Temin Craft Village to embellish Terenang. Traditionally made Terenang did not come in standard size, but with years of experiences of these craftsmen, Terenang can be made accordingly based on requirement and on what function Terenang want to be used for.

In Temin Craft, Terenang was produce in three design; with no base and cover; with lid only and with base and lid. Modern technique of producing Terenang help to produce Terenang with different sizes, according to its specific functions, needs and requirements.

Terenang maker, Mohammad Zakaria, 48 said, Terenang can be produce in large quantity per day by using the mould technique. This time saving technique gives the craftsmen more time to focus more on decoration aspect. Previously, Terenang was decorated with design made by impressing the wood that has been carve with specific motif.

Furthermore, the dipping techniques (teknik melicau) is the technique used to beautify Terenang. This technique will make the surface of Terenang looks like it was covered with wax and can be done with various colors. Besides dipping, Terenang can also be adorned with carving and dye technique.

In recent time, the production of Terenang in Pahang has becoming more worrying since there is only one craftsmen left after Hajah Noriah completely stop making it due to health factor. She and her friend, Zainal Idris has been producing Terenang based on order they get from local and international tourist and also from VIPs.

Terenang is a hand-made legacy passing down from generation to generation and it is such a loss to see it ended due to no inheritor. Although there is some efforts by Kraftangan Malaysia, such as the establishing of National Craft Institute that offer a diploma course on pottery making but nonetheless, it brings no impact especially to the producing of Terenang.

In the meantime, CMLHS lecturer, Dr. Hasnah Hussiin said, UMP established Pahang Heritage Cluster as an effort to study the history and heritage of Pahang and hoping that outcome from this study will benefit the local community. She added, a conference on Terenang Ceramic Heritage will be held in August to lift the legacy of Terenang Ceramic up to international level. She really hopes that the State of Pahang will do their job in restoring and preserving the legacy of Terenang as what they have been doing to Pahang Weaving (Tenun Pahang), and become the exclusive craft of Pahang.