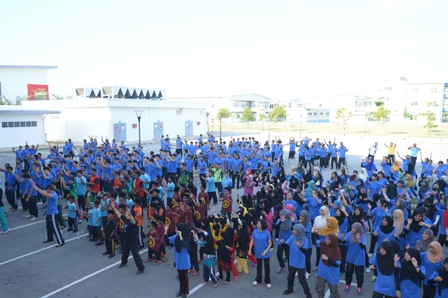 Some 600 participants took part in a charity run organised by Universiti Malaysia Pahang (UMP) aimed at raising funds for three charity homes recently. The charity run, 'Larian Amal Penyayang 2.0' was held at the university's Pekan Campus on April 18, 2015. Those who took part included UMP undergraduates and orphans from the three homes. Two celebrities, Norman Hakim and Fida Ibrahim were also invited which made the affair more fun and merrier.  The charity event was organised by Kelab Penyayang. Apart from collecting funds for the homes, it was also meant to add cheer to the orphans who were Permata Camar Orphanage, Permata Insyirah Home and Amal Hembusan Kasih Sayang Home. The event was held for the second time and there were other activities organised such as a colouring contest and a talk by a celebrity on living a healthy lifestyle.  The undergraduates and orphans also got to meet and greet the celebrity who spoke about adopting a sensible approach in time management to ensure one could stay healthy, fit and able to productively plan for the future. The programme was officially closed by Acting Registrar Abd Rahman Haji Safie who also gave away prizes to winners of the run and colouring contest. Also present was the club's advisor Rozana Shahadan.  The programme was meant to inspire university undergraduates to be more compassionate to the needy and have empathy for the less fortunate such as the orphans.  It was also seen as responding to the call made by UMP Vice Chancellor Professor Dato' Dr.Daing Nasir Ibrahim who had put an emphasis on living a healthy and quality lifestyle. The initiative was in line with the university's aspiration for more efforts to be taken that involved the community. A total of RM5,000 was raised and the fund was later presented to the three homes.