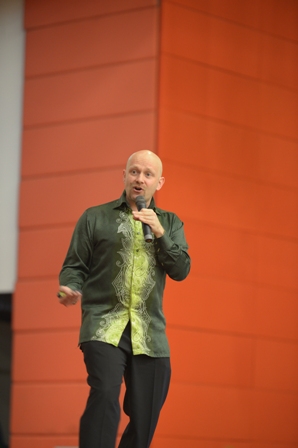 Dubbed as the Green Man, Matthias Gelber, stepped onto the platform of Universiti Malaysia Pahang (UMP) to deliver a public talk titled 'Eco Challenges and Opportunities for Modern Society' at the Sports Complex, Gambang Campus on December 10, 2014.  In his casual manner, Gelber charmed the audience of about 2,000 on his exploits and involvement in construction, environment and corporate social responsibility and the impacts on ongoing commitments towards environment sustainability.  Apart being named as 'The Greenest Person on the Planet 2008' by Canadian 3rd Whale and 'Man of the Year 2008 in Malaysia (Clive Magazine), Gelber was also listed among the '50 Expats You Should Know in Town: Expatriate Lifestyle Jan 2010'. He was made an ambassador for the brand 'G-BLOCK'.

The public talk was organised by the Department of Academic and International Affairs and that it was an initiative by UMP to having a discourse that discussed about the role of mankind towards preserving the earth and environment, and the link between nature and weather phenomenon happening around the world.  Also present was UMP Vice-Chancellor, Professor Dato' Dr. Daing Nasir Ibrahim who delivered a welcoming speech and introduced Gelber as the speaker.

Professor Dato' Dr. Daing Nasir said, the programme was about environment, which was synonymous to Matthias, an activist who championed a lot of green and earth issues and responsible in organising a series of green-innovative programmes.  He added that by organising a public talk such as this, it would help to further enrich a setting that would support academic excellence of a university with the knowledge reaching out and touching the people in campus and those outside of the campus.  He also said in their efforts to achieve excellence in teaching and research, UMP was committed in running the university sustainably and for them to be more thoughtful when using power and natural resources for this could contribute towards the national agenda on environment and sustainability.

As for its aspiration in implementing the Green Campus Initiative, several factors were taken into consideration that included cutting wastage especially in energy consumption and other fuels, reducing pollution in both campuses in Gambang and Pekan, taking serious steps to manage natural resources and organising green campaigns.  Professor Dato' Dr. Daing Nasir said, UMP was also active in promoting more researches with themes centring on Energy Efficiency, Biodiversity, Sustainability, Renewable Energy, Sustainable Technology and Environmental Sustainability.  Apart from that, there were awareness programmes carried out for its staff, programmes on power efficiency and environment performance including trainings for staff as well as activities planned for residents in the surrounding area.  He hoped that academicians, researchers, students and community leaders could benefit from the series of public lectures organised by UMP where they could share knowledge and expertise with invited guest speakers about issues affecting the people and nature.