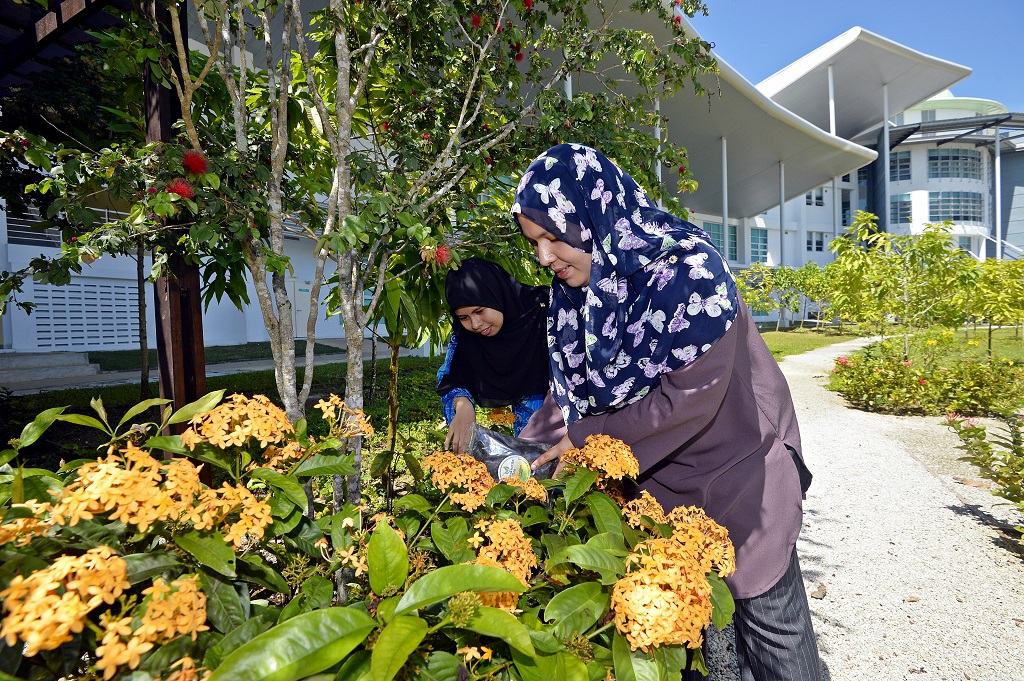 Palm oil plantation in the country is the largest agriculture crop in the country and as such, mass oil production of that scale will surely result in massive waste of empty fruit bunch. In fact, only 10 percent of the oil is produced while the remaining 90 percent is agriculture waste or biomass. Some of the waste are processed into animal food while some are simply thrown away. This situation made Dr. Nor Hanuni Ramli@Said, a researcher with Universiti Malaysia Pahang (UMP), to come up with an idea on finding means to turn the biomass into organic fertiliser.

Dr. Nor Hanuni who is also a lecturer with Faculty of Chemical & Natural Resources Engineering (FKKSA) said, a research was conducted that also involved tackling problems relating to pollutions and how to manage the huge amount of waste discarded by factories around UMP and throughout the state.

“The compost is 100 percent organic. It is produced by way of composting method that involves decomposition (oxidation) of the organic waste which is then processed into products that can be used for growing crops.

“It involves aerobic composting method, mixing micro-organism, air, humidity and nutrient or suitable material for composting. The compost produced has basic nutrient needed by crops and has high water holding capacity,” she said. She added that the research received a grant under UMP Lab2Market Grant Programme, with the objective of producing the product for the commercial market.

“We marketed the products in two sizes, a pack of one kilogram priced at RM10 and a pack of 10 kilograms priced at RM50. We also brought the products to MAHA Exhibition 2016. “We are mindful that awareness towards organic products especially on food resource among Malaysians is still low as compared to countries such as the UK, US and Singapore.

“The prices of organic fruits and vegetables are sold up to three times higher than the inorganic crops in the countries,” she said. She also said by producing organic products, this would help to increase awareness and educate the public on crops grown using natural materials.

She hoped that more could be done so the society could be educated and informed about using organic products in their daily lives and for them to grow their own vegetables that would be healthier and cost-saving, and helped improve their economic standing. Dr. Nor Hanuni also said although there were a lot of compost fertilisers in the market, not all were genuine because some producers added nutrients from inorganic resource.