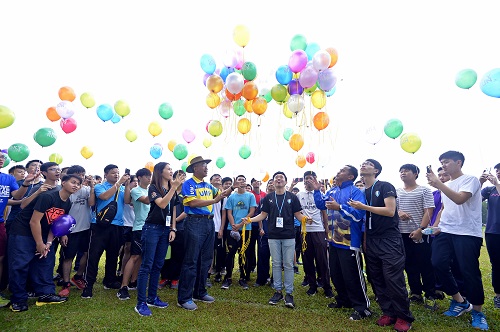 The seven kilometre run were flagged off by Deputy Vice-Chancellor (Student Affairs & Alumni). Also present were the Director of Sports & Culture Centre of UMP.

According to Dato’ Yusserrie, this programme aims to encourage the campus community to adapt the healthy way of living into their daily lives as well as to foster the sporting spirit while introducing a unique marathon concept to the participants.

Beh Yu Ling, the director of the program said, the runner will have to pass all three checkpoint. At each checkpoint, they will be given a sticker note to write their hope or wishes and paste it at the notice board set up at the finishing line.

“Sky Run is an opening act and one of Badminton Club initiatives to raise fund for UMP Badminton Open 2017 that will be held from 3 to 5 November 2017 at UMP Sports Complex,” he added.

For those who are interested to join the tournament, kindly visit http://umpbadmintonopen.azurewebsites.net/ or at facebook page https://www.facebook.com/umpbadmintonopen/ .