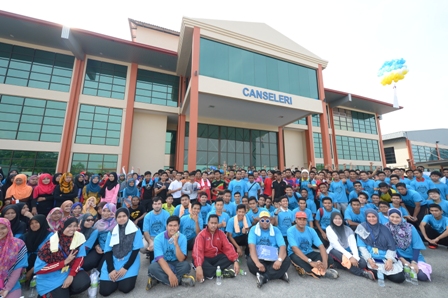 The Healthy Undergraduate Student Programme (PROSIS) is a programme that is jointly organised by UMP Student Health Centre and Ministry of Health. More than 2,000 UMP denizens took part in the programme at the Sports Complex Square, held in conjunction with the induction week for the university's new intakes on September 6, 2015.  The event started off with light exercises. The participants then proceeded to walk 10,000 steps, striding steadily for six kilometres for an hour.  A charity run, 'Larian Amal Penyayang 2.0', was held on April 18, 2015. It was a fund-raising activity to raise money for charity homes and orphanages. It was organised by Kelab Penyayang that also aimed at forging closer ties with orphans from Rumah Anak Yatim Permata Camar, Permata Insyirah and Rumah Amal Hembusan Kasih Sayang.  UMP Vice Chancellor Professor Dato' Dr. Daing Nasir Ibrahim also launched the 1,000 Steps Programme that attracted some 500 participants at the Chancellery Square on June 10, 2015. It was held in conjunction with the Healthy Lifestyle Campaign organised by the Registrar Department and UMP Sports Centre.  It was held simultaneously in the Gambang Campus and Pekan Campus. Various activities were carried out every month such as Zumba exercise, aerobics, cycling and blood donation drive.