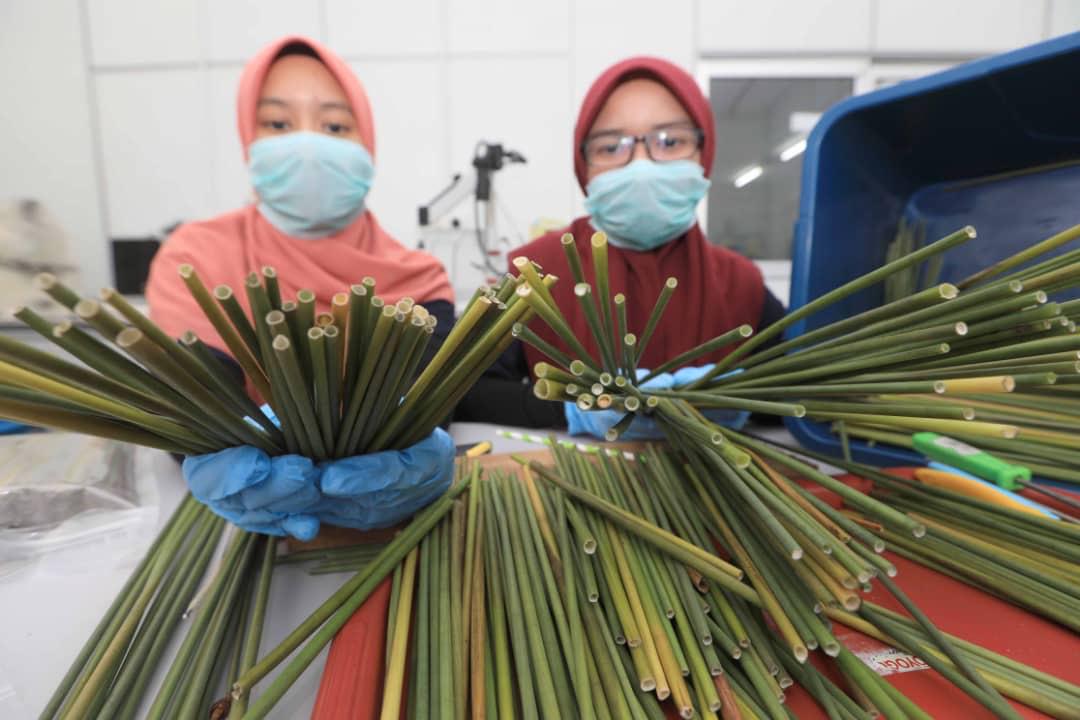 Kuantan, 21 January – Recognising the importance of controlling environmental pollution caused by the use of plastics, various initiatives to replace plastic straws are being undertaken, seeing that straws made of plastic take more than 500 years to degrade while polluting the environment and endangering living things on Earth.

Recently a group of students from the Sekretariat Ikatan Siswa Anak Darul Ta’zim (ISKANDAR) successfully created drinking straws from natural materials, namely an aquatic plant called the kercut plant or purun plant. The aquatic plant used is a type of sedge that has similar characteristic to lake grass or wild grass that grows in watery habitats such as rice fields and marshes that are common in the east coast of Peninsular Malaysia.

UMP student, Nurul Farah Anisa Hairolnizam, who is also the Project Director, said that the Ecofriendly Straw Project (Jauhar Straw) is an initiative to find an alternative to reduce the use of plastic drinking straws.

“At first, it was a project from the Mahasiswa Harapan Masyarakat Programme under the Johor Education Foundation (YPJ) which aims to develop students to become the change needed to improve their communities’ life and culture,” she said.

She added that at the moment, the straws are produced by the UMP students without using machinery. Besides that, this project can help raise awareness to the public of the importance of taking care of our ecosystems and the environment.

For Dr. Suryati Sulaiman who is a lecturer from the Faculty of Civil Engineering Technology (FTKA), Universiti Malaysia Pahang (UMP), research on the potential of the kercut plant was carried out via the  ‘phytogreen’ research project headed by Dr. Abdul Syukor Abd. Razak in 2012. Later on, the research was carried out in stages leading to the production of the Jauhar Straw around 2019.

“Before this, the kercut plant was widely used for handicrafts such as weaving, rug making and in traditional medicine,” she said as the head advisor of the Jauhar Straw Project.

She stated that in ensuring that the straw is safe for use, eight processes must be carried out and tested for sanitation, including the cleaning process, cutting it to the correct size, removing membranes inside the plant using a special brush and drying it under the sun for a certain period.

This innovation will also provide jobs for the target group to generate income as well as offer benefits to the local people. They appreciated the support of YPJ, especially YPJ General Manager, Hj. Mahadon Marnin who entrusted UMP students to successfully undertake this project.

At the current time, there are many alternative types of drinking straws in the market, including paper, metal, glass, bamboo, and copper straws. Even straws made of rice and cassava are available.