AGRISOFT to boost production for farmers and breeders 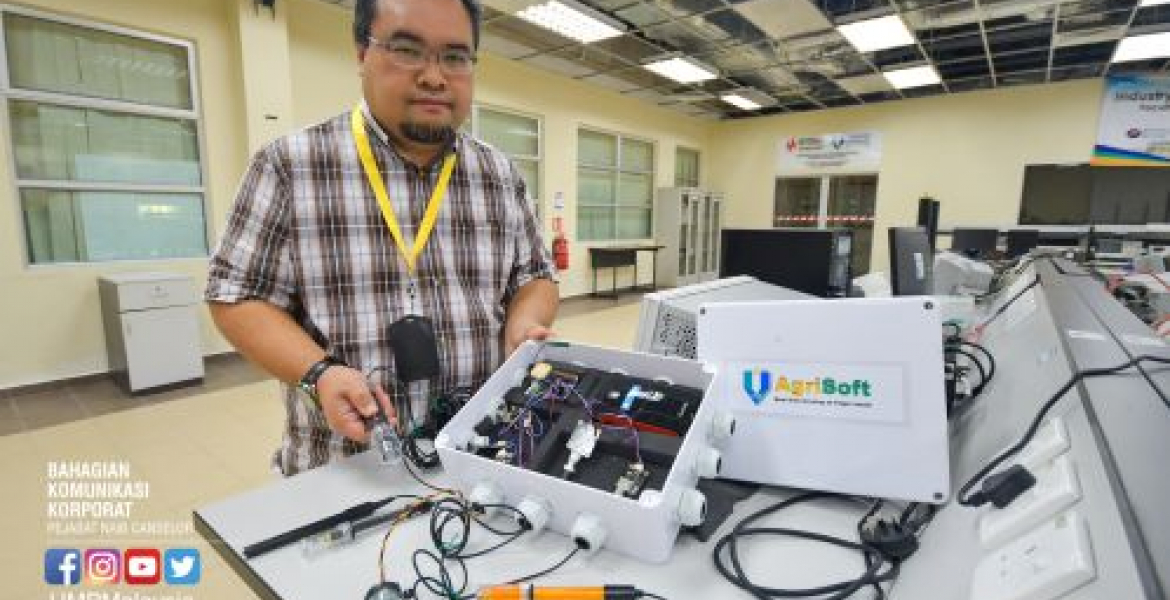 Concern with problems often faced by farmers or breeders in monitoring and regulating their crops or livestock has motivated a Universiti Malaysia Pahang (UMP) researcher to come up with a system called IoT-Enabled Farmer Digital Expert System @ AGRISOFT.

The system is developed to help overcome losses due to damages in crops or livestock caused by ecological changes which have not been observed earlier.

According to Lead Researcher and Director of Industrial Centre of Excellence (ICoE) for Electrical and Electronic Cluster, Associate Professor Ir. Ts. Dr. Fahmi Samsuri, he came up with the idea after seeing most farmers and breeders in Malaysia still relied on the conventional system, the labour-based system, when working on their land or breeding livestock.

“This can cause them to incur high losses unless the ecological factors can be identified sooner with preventive and corrective actions be taken faster, thus saving their yields and harvests which can be sold to customers.

“By using modern technology, it can help increase their production and reduce dependency on manual labour.

“For example, in Europe and the USA, modern technology have been used in the agriculture and livestock industries and resulted in them being among the world’s biggest crop and aquaculture producers,” he said.

On AGRISOFT, Professor Ir. Ts. Dr. Fahmi explained that readings related to the ecological elements such as temperature, humidity, pH level of the soil or water, oxygen concentration, the murkiness of the water, electrical conductivity of the water and also the potential level of oxidation in soil or water could be obtained from sensors installed in the system.

“After the readings are obtained, the system will record the data and make recommendations on the necessary actions to be taken in order to overcome problems arising from changes that occur in the parameters.

“For example, the suitable pH range for planting crops is between pH level 6 and 8, and the reading showed a surge higher that the suitable range.

“The system will then send the information to the user through telephone with suggestions on the right measures to be taken such as reducing the pH level to the precise level by increasing fertilisers containing sulphur, iron and aluminium into the soil,” he said.

He added that the system demonstrated the most suitable way in assisting farmers or breeders to grow vegetables or commodity crops such as oil palm trees and modern crops planted using the hydroponic method.

It was also suitable for rearing fish or prawns in cages, he said.

“The system operates by collecting data from sensors placed around the area where crops are planted or where the cages are placed. Readings can be taken by the minute or on hourly and daily basis, depending on the condition or needs of the crops or livestock.

“If something happens, the sensor will detect the changes and send a warning signal to the main control system. All these can be linked either by wired or wireless broadband connections.

“The main control computer system will then process the information, send messages and recommend actions to be taken via short messaging system or SMS in mobile phones.

“All the communications are made through the Internet and this will allow the user to get notifications from anywhere and at any time,” he said.

Professor Ir. Ts. Dr. Fahmi also said research on the system began in 2015 and was developed in stages with the first stage commenced the following year while the second stage was completed in 2019.

“Works are now being conducted to complete the third stage of the research,” he added.

The third level of the research involves developing an online application system (mobile apps) and users can have access and control of their crops or livestock by using the mobile apps installed in their mobile phones.

All the data and information are stored in the iCloud database which is accessible from any location and at any time. All processes can be managed and controlled at the touch at the fingertips.

The Perak-born researcher planned to expand the system in other industries such as in rearing of dairy animals (cattle, goats) and bird nest farming.

He hoped that the system could be developed to help small-time farmers and breeders to optimise their production at a lower cost by using modern technology.

For those who are interested in having the system, a complete set cost between RM1,500 to RM3,000 - depending on the model, the type and the number of sensors required.

AGRISOFT has won medals and received credits in various national and international conferences and expositions including a gold medal at the Creation, Innovation, Technology and Research Exposition (CITREX) in 2016 and 2019, a gold medal and a CARIFF Special Award at the Citrex 2016, a silver medal at the Institute of Higher Learning Invention Expo and Conference (PECIPTA) 2019 and a silver medal at the International Invention, Innovation and Technology Exhibition (ITEX 2019).